We examined mother-child (M-C) conflict behavior during the toddler years. The nature of M-C conflict behaviors, whether conflict behavior differed by context, and factors that were associated with conflict interactions were examined. We used data collected as part of the National Evaluation of the Healthy Steps for Young Children Program. 378 M-C dyads participated in this study. Videotaped observational data at 16–18 months were used to code conflict behaviors using an event recording method. Results showed that M-C conflict were more likely to be initiated by the mothers and that conflict interactions were influenced by context of interaction, family, maternal, and child temperamental factors. In this study, we provide a foundation for understanding parent-child conflict interaction prior to age two.
vorige artikel Assessment and Decision-Making in Early Childhood Education and Intervention
volgende artikel Development and Validation of a Short Form of the Alabama Parenting Questionnaire 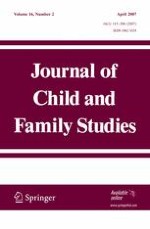 Evidence-based Practice Use, Training and Implementation in the Community-Based Service Setting: A Survey of Children’s Mental Health Service Providers