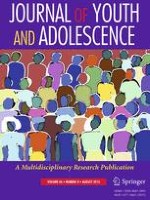 Contextual Specificity in the Relationship between Maternal Autonomy Support and Children’s Socio-emotional Development: A Longitudinal Study from Preschool to Preadolescence

Changes in Religiosity Across the Transition to Young Adulthood

Sexual (Minority) Trajectories, Mental Health, and Alcohol Use: A Longitudinal Study of Youth as They Transition to Adulthood

Laurence Steinberg: Age of Opportunity: Lessons from the New Science of Adolescence