Social anxiety (SA) is characterized by marked difficulties in forming and maintaining social relationships. Several theoretical perspectives suggest that individuals with social anxiety tend to prioritize social rank goals. As such, the socially anxious view the world in hierarchical rather than cooperative terms.

One hundred and eleven participants were assigned to one of three subgroups based on SA severity and depressed mood. The resulting subgroups consisted of participants with elevated levels of SA, with and without depressed mood (n = 46 and n = 24, respectively) as well as non-anxious participants (n = 41). By using an asymmetrical Ultimatum Game (UG) in which participants’ identities were concealed, we sought to investigate how SA levels modulate behavioural responses to unfair treatment and to subsequent fairness considerations.

Taken together, our findings show that given the chance, individuals with elevated SA can resort to active punishment instead than acting submissively in asymmetric interactions, in partial disagreement with theoretical models of SA. We further advance that social rank threats are important drivers of punitive actions in SA. Empirical and practical implications, as well as interpretative caveats, are discussed.
vorige artikel Social Anxiety Disorder and the Fear of Death: An Empirical Investigation of the Terror Management Approach towards Understanding Clinical Anxiety
volgende artikel Examining the associations between interpersonal emotion regulation and psychosocial adjustment in emerging adulthood 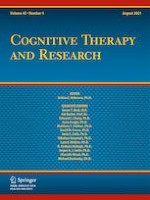 The Effects of Mindfulness Meditation on Attention, Executive Control and Working Memory in Healthy Adults: A Meta-analysis of Randomized Controlled Trials

Personality Disorders and Their Relation to Treatment Outcomes in Cognitive Behavioural Therapy for Depression: A Systematic Review and Meta-analysis

Predicting and Moderating the Response to the Unified Protocol: Do Baseline Personality and Affective Profiles Matter?