Early detection and treatment have been shown to be effective in reducing disability severity caused by Autistic Spectrum Disorders (ASDs). As Spanish pediatricians have no detection tool, the Modified Checklist for Autism in Toddlers (M-CHAT) was first translated into and culturally adapted to Spanish. Validity and reliability studies were carried out in two different geographical areas of Spain, where M-CHAT was administered to two different samples, namely: 2,480 high- and low-risk children; and 2,055 low-risk children. The results obtained were similar to those yielded by the original M-CHAT studies. Differences were found in positive predictive value, due to the low ASD frequency observed in this study. M-CHAT is still being studied in a large population-based screening program in Spain.
vorige artikel Effects of a Family-Implemented Treatment on the Repetitive Behaviors of Children with Autism
volgende artikel No Proprioceptive Deficits in Autism Despite Movement-Related Sensory and Execution Impairments 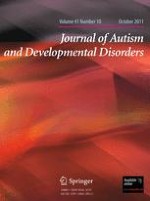