Anxiety Sensitivity (AS) is the fear of normal, arousal-related bodily sensations due to the belief that they have negative consequences. People with high AS impose negative interpretations on bodily sensations. Research shows that interpretive biases can be modified through cognitive training. In this study, the impact of interpretation training on AS, interpretive biases and reactions to bodily sensations was examined in high AS individuals. Participants (N = 34) were assigned to a training condition designed to induce a benign interpretive bias, or a “sham” control condition. Following training, only participants in the training condition reported significant decreases in overall AS and fear of the social and physical consequences of anxiety. In response to vignettes describing ambiguous sensations, only participants in the training condition reported negative explanations of such sensations as less likely to come to mind. Training did not impact reactions to bodily sensations. Theoretical and methodological implications are discussed.
vorige artikel Are Negative Automatic Thoughts Associated with ADHD in Adulthood?
volgende artikel Feeling Too Regretful to Fall Asleep: Experimental Activation of Regret Delays Sleep Onset 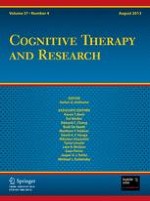 An Examination of Optimism/Pessimism and Suicide Risk in Primary Care Patients: Does Belief in a Changeable Future Make a Difference?

Sudden Gains in the Cognitive-Behavioral Treatment of Generalized Anxiety Disorder