Physical health disparities by sexual orientation are widespread yet under-investigated. Drawing upon theories of biological embedding of social adversity, we tested whether minority stress (in the form of perceived discrimination) is associated with salivary interleukin-6 (IL-6), an inflammatory mediator. Furthermore, we examined whether covering, a strategy involving downplaying a stigmatized social identity, modified this association. A community sample (N = 99) of gay men (n = 78) and lesbian women (n = 21) completed self-report measures of minority stress and identity management and provided saliva samples which were assayed for IL-6. Among gay men, results from generalized linear models supported a hypothesized interaction between perceived discrimination and covering, such that perceived discrimination was predictive of higher levels of IL-6 for those who engaged in less covering but not for those who engaged in more covering. This interaction was robust to a number of potential covariates (alcohol, medication, body mass index, race and age). Results for lesbian women suggested a different pattern: the only statistically significant association detected was between greater perceived discrimination and lower levels of IL-6. Findings from the current study point to an important role for inflammatory processes in understanding and remediating health disparities based upon sexual orientation that stem from exposure to prejudice and discrimination.
vorige artikel Assessment of factors associated with the quality of life of patients living with HIV/HCV co-infection
volgende artikel Can a health coaching intervention delivered during pregnancy help prevent excessive gestational weight gain? 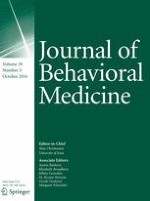 The role of appraisal and coping style in relation with societal participation in fatigued patients with multiple sclerosis: a cross-sectional multiple mediator analysis

The “self” in pain: the role of psychological inflexibility in chronic pain adjustment