Mindfulness, Social Safeness and Self-Reassurance as Protective Factors and Self-Criticism and Revenge as Risk Factors for Depression and Anxiety Symptoms in Youth | mijn-bsl Skip to main content
ZOEKEN MENU 1 2 3 4

We applied a stepwise multiple linear regression to the data of 424 youth aged 13 to 22, who completed depression, anxiety, social safeness, mindfulness, forgiveness, self-reassurance, anger control, positive and negative affect, self-inadequacy, self-hate and revenge measures. The strongest protective factors were extracted first, followed by the next strongest factor, while controlling for the combined effect of previously extracted factors, until no significant factors were identified.

Mindfulness, social safeness and self-reassurance were the strongest and the most relevant protective factors against depressive and anxious tendencies together explaining over 40% of variance in anxiety and over 30% in depression scores. After controlling for protective factors, risk factors explained 23% of variance in anxiety and 9% in depression with self-inadequacy, revenge and negative affect being the major risks. 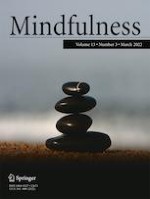 The Differential Effects Fallacy in the Study of Self-compassion: Misunderstanding the Nature of Bipolar Continuums

Does Mindfulness Moderate the Link of Worry About COVID-19 With Adjustment? An Actor-Partner Interdependence Model Approach