Mindfulness has been used as an intervention for specific sexual dysfunctions in women; evidence has also accumulated for the role of mindfulness in treating the kinds of psychological difficulties which are associated with sexual dysfunction. This paper describes, within a clinical context, a qualitative approach to protocol and theory development for a mindfulness-based sex and intimate relationship (MSIR) programme as a generic adjunct to sex therapy. The aim was to adapt the mindfulness-based cognitive therapy (MBCT) group protocol to address diverse sexual and intimacy difficulties. The protocol was developed on an iterative basis and piloted with 30 patients referred from a sexual dysfunction clinic. Twelve participants came forward to be interviewed and their transcripts were analysed in two phases using a grounded theory approach, to produce a model generating testable hypotheses. The reduction of experiential and behavioural avoidance was central to the model that emerged from the analysis, along with the relinquishing of sexual goals in favour of focus on sensory experience. The analysis led also to a tentative staging of mindfulness, associated with enhanced experience. The adapted MBCT protocol for diverse sexual difficulties was found to be feasible and appeared positive for participants. Thus, MSIR shows promise as a generic adjunct to sex therapy.
vorige artikel Mindful Parenting Training in Child Psychiatric Settings: Heightened Parental Mindfulness Reduces Parents’ and Children’s Psychopathology
volgende artikel Self-Compassion and Dispositional Mindfulness Are Associated with Parenting Styles and Parenting Stress: the Mediating Role of Mindful Parenting 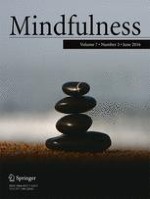 Mindfulness and Relaxation: a Comparison of Brief, Laboratory-Based Interventions