MBSR(BC) is known to have a positive impact on psychological and physical symptoms among breast cancer survivors (BCS). The cognitive mechanisms of “how” MBSR(BC) works was addressed in a recent study that found that there was strong consistent evidence that reduced emotional reactivity is a mediator and moderate consistent evidence that mindfulness, rumination, and worry were mediators. The purpose of this study, as part of a larger R01 trial, was to test whether positive effects achieved from the MBSR(BC) program were mediated through changes in increased mindfulness, decreased fear of breast cancer recurrence, and perceived stress. Female BCS > 21 years diagnosed with Stage 0-III breast cancer were randomly assigned to a 6-week MBSR(BC) or a Usual Care (UC)regimen. Potential mediators of 6- and 12-week outcomes were identified by analysis of covariance (ANCOVA), followed by formal mediational analyses of main effects of MBSR(BC) on 6- and 12-week outcomes, including percentage of total effects explained. Among 322 BCS (167 MBSR(BC) and 155 UC), fear of recurrence and perceived stress, but not mindfulness, mediated reductions in anxiety and fatigue at weeks 6 and 12, partially supporting our hypothesis of cognitive mechanisms of MBSR(BC). 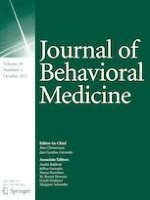 Latent class growth modelling for the evaluation of intervention outcomes: example from a physical activity intervention

Web-based cognitive behavior therapy for chronic pain patients with aberrant drug-related behavior: How did it work and for whom?

Beyond political affiliation: an examination of the relationships between social factors and perceptions of and responses to COVID-19