A total of 152 parent–youth dyads, consisting of 29.6% Indigenous and 70.4% non-Indigenous, were contrasted on level of agreement using the Child Behavior Checklist and Youth Self-Report forms of the Achenbach System of Empirically Based Assessment. 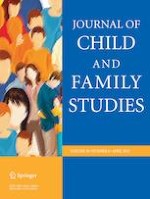 Psychiatric Disorders in Mothers of Children with Attention-Deficit/Hyperactivity Disorder: A Population-Based Perspective

Excessive Force and Students with Disabilities: Legal and Practice Considerations