To characterize child survivors’ mental health and quality of life after a massive earthquake.

A population-based survey of 596 children aged between 8 and 16 years was conducted in the severely affected areas of the earthquake, using a multi-stage systematic sampling design.

The point prevalence rates of posttraumatic stress disorder (PTSD) and depression among the child survivors aged between 8 and 16 years 15 months after the earthquake were 12.4 and 13.9%, respectively. Health-related quality of life (HRQoL) was found to be strongly and negatively associated with PTSD and depression. Children who had lost family members were most likely to develop PTSD (OR = 6.6; P < 0.001) as well as depression (OR = 4.1; P < 0.001). Children who reported no utilization of mental health services were four times more likely to suffer from PTSD than those who did not (P = 0.002).

More than one in five child survivors were identified as having PTSD or depression; HRQoL of these identified children were deeply compromised. Utilization of mental health services may significantly reduce the risk of developing PTSD symptoms.
vorige artikel The relationship between parental overprotection and health-related quality of life in pediatric cancer: the mediating role of perceived child vulnerability
volgende artikel In reply to: association between utility and treatment among patients with prostate cancer 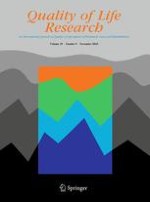 The relationship between parental overprotection and health-related quality of life in pediatric cancer: the mediating role of perceived child vulnerability