Research has shown that cognitive processes like the attribution of hostile intention or angry emotion to others contribute to the development and maintenance of conduct problems. However, the role of memory has been understudied in comparison with attribution biases. The aim of this study was thus to test if a memory bias for angry faces was related to conduct problems in youth. Adolescents from a junior secondary school were presented with angry and happy faces and were later asked to recognize the same faces with a neutral expression. They also completed an impulsivity questionnaire. A teacher assessed their behavior. The results showed that a better recognition of angry faces than happy faces predicted conduct problems and hyperactivity/inattention as reported by the teacher. The memory bias effect was more pronounced for impulsive adolescents. It is suggested that a memory bias for angry faces favors disruptive behavior but that a good ability to control impulses may moderate the negative impact of this bias.
vorige artikel Patterns of Psychopathology in the Families of Children with Conduct Problems, Depression, and both Psychiatric Conditions 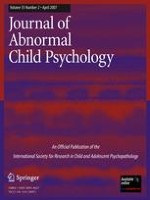 What is the Social Impact of ADHD in Girls? A Multi-Method Assessment

Parent and Child Agreement for Acute Stress Disorder, Post-Traumatic Stress Disorder and other Psychopathology in a Prospective Study of Children and Adolescents Exposed to Single-Event Trauma

“Accept Me, or Else…”: Disputed Overestimation of Social Competence Predicts Increases in Proactive Aggression

Social Cognition and Externalizing Psychopathology: An Investigation of the Mediating Role of Language