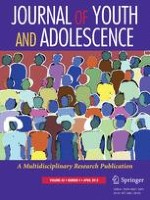 Relational Victimization, Loneliness and Depressive Symptoms: Indirect Associations Via Self and Peer Reports of Rejection Sensitivity

Trajectories of Depressive Symptoms from Adolescence to Young Adulthood: The Role of Self-esteem and Body-Related Predictors

The Development of Moral Emotions and Decision-Making From Adolescence to Early Adulthood: A 6-Year Longitudinal Study