This study examined media use and psychological adjustment (as indicated by depression and anxiety symptomatology) in a sample of 328 14- to 16-year-old adolescents. Primary goals of the study were to explore whether media use differs by gender, whether media use is related to adolescent psychological problems, and whether media use moderates the relationship between parental alcoholism and adolescent psychological adjustment. Adolescents were surveyed in the spring of 2006, and again one year later. Gender differences in media use were observed with boys spending more time playing video games than girls and girls spending more time talking on the phone than boys. Strikingly, none of the types of media examined was associated with depression or anxiety. Moreover, media use acted as a protective factor for boys. Boys who spent relatively more time playing video games and watching television had the lowest levels of anxiety, especially those from alcoholic homes. The opposite pattern emerged for girls. 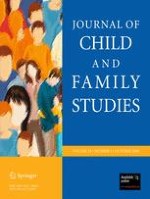 Predicting Readmission to a Child Psychiatric Inpatient Unit: The Impact of Parenting Styles