Researchers, funders, and institutions are interested in understanding and quantifying research dissemination and impact, particularly related to communicating with the public. Traditionally, citations have been a primary impact measure; however, citations can be slow to accrue and focus on academic use. Recently altmetrics, which track alternate dissemination forms (e. g., social media), have been suggested as a complement to citation-based metrics. This study examines the relationship between altmetrics and traditional measures: journal article citations and access counts.

The researchers queried Web of Science and Altmetric Explorer for articles published in HPE journals between 2013–2015. They identified 2,486 articles with altmetrics. Data were analyzed using negative binomial and linear regression models. 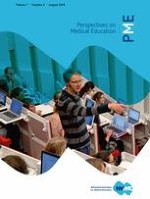 Teaching clinical skills in the theatre of medicine

A health professions education editors’ open letter to our community

On learning in the clinical environment

Sprint to work: A novel model for team science collaboration in academic medicine

The international health elective: a stepping stone for tomorrow’s global surgeons and anaesthetists