Individuals with Autism Spectrum Disorders (ASD) have difficulties with imitation, though the nature of these remains unclear. In this study, involving 28 preschoolers with ASD (M age = 48 months; 90 % male), 17 matched children with Global Developmental Delay (GDD group; M age = 44 months; 53 % male) and 17 typically developing children (TD group, M age = 52 months; 65 % male), we found that preschoolers with ASD 1) imitate less frequently than both typically developing children and children with GDD; 2) when they do imitate, their imitation is less accurate than that of TD children but similar to that of children with GDD; 3) unlike participants in both comparison groups, preschoolers with ASD use emulation more often than imitation when copying others’ actions; 4) they spend less time looking at the model’s face and more time looking at her actions; and 5) attentional, social and executive factors underlie different aspects of imitation difficulties in this population. Implications for developmental models of autism are discussed.
vorige artikel Sex Differences in Autism Spectrum Disorder based on DSM-5 Criteria: Evidence from Clinician and Teacher Reporting
volgende artikel Evaluating Clinically Significant Change in Mother and Child Functioning: Comparison of Traditional and Enhanced Behavioral Parent Training 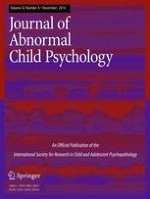 Symptoms of Attention-Deficit/Hyperactivity Disorder and Peer Functioning: a Transactional Model of Development

The Role of Temperament by Family Environment Interactions in Child Maladjustment

Analysis of the Convergent and Discriminant Validity of the CBCL, TRF, and YSR in a Clinic-Referred Sample