Maturation beyond Age: Interrelationships among Psychosocial, Adult Role, and Identity Maturation and their Implications for Desistance from Crime | mijn-bsl Skip to main content
ZOEKEN MENU 1 2 3 4

The integrated maturation theory describes psychosocial, adult role, and identity maturation as interrelated domains associated with criminal desistance, but to this point these domains have not been examined simultaneously, which raises questions about the relative importance of each domain to desistance. The aims of the current study were to unravel the development of maturation by examining interrelationships across components of psychosocial, adult role, and identity domains while also clarifying which components were related to desistance. Data were used from the Pathways to Desistance Study on male (n= 1170) and female (n= 184) youth with a history of offending. Participants were an average age of 14.04 (SD= 1.14) at baseline and were followed for seven years. Network modeling examined, from between-subjects and within-individual perspectives, (a) relationships among repeated measures of psychosocial, adult role, and identity maturation components and (b) relationships between these components and offending. Based on centrality indexes from the between-subjects network, responsibility (psychosocial domain), work orientation (adult role domain), and self identity (identity domain) were most important to the development of maturation. After accounting for interrelationships among maturation components, measures of consideration of others (adult role domain) and moral disengagement (identity domain) related to both lower levels of offending and within-individual declines in offending. The findings supported the integrated maturation theory’s description of maturation as comprised of a wide range of interrelated components across different domains that are important to desistance.
vorige artikel Do Identity Processes and Psychosocial Problems Intertwine with Each Other? Testing the Directionality of Between- and Within-Person Associations
volgende artikel Neighborhood Profiles and Associations with Coping Behaviors among Low-Income Youth 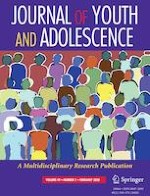 A Longitudinal Examination of the Relation Between Lie-Telling, Secrecy, Parent–Child Relationship Quality, and Depressive Symptoms in Late-Childhood and Adolescence

Never Mind the Acculturation Gap: Migrant Youth’s Wellbeing Benefit when They Retain Their Heritage Culture but Their Parents Adopt the Settlement Culture

Do Identity Processes and Psychosocial Problems Intertwine with Each Other? Testing the Directionality of Between- and Within-Person Associations