Aims of the study

This study was part of a larger project investigating healthy lifestyle in parent–child dyads (see Horodyska et al., 2017). Mothers and their 5- to 11-year-old children (N = 729 dyads, N = 1,458 individuals) participated in the baseline measurement (T1), whereas n = 495 mother–child dyads provided their responses at T2 (7–8 months after T1).
Attrition analyses indicated that mothers who completed T1 and T2 did not differ from mothers who dropped out in terms of parental strategies or socioeconomic status but differed in terms of age (mothers who dropped out were younger; see Supplement 1). Children who completed T1 and T2 did not differ from children who dropped out in terms of age, gender, or physical activity. Those who dropped out had a higher BMI z-score and reported more screen use (Supplement 1).
Mothers or female legal guardians (henceforth referred to as “mothers”) who indicated that they were the main caregivers in terms of time spent with their child and organizing child PA were invited to participate. Dyads with children with impairments and physical disabilities resulting in major movement restrictions (e.g., cerebral palsy) were excluded from the study. Regarding younger children (aged 5–7 years old), only those who either had already attended primary schools or reached school readiness (required to start first grade) were included.

Prior to the study from which the data for this analysis was obtained, a pilot study with N = 18 children (aged 5–11 years old) was conducted to check participants’ understanding of the items assessing screen use and physical activity. Children were asked to explain the instructions and the items in their own words and to indicate any phrases they did not understand/were unsure of. The pilot study indicated that, using provided instructions and the items, children were able to correctly classify their behaviors referring to screen use and mild, moderate, and vigorous physical activity.
Data were collected between 2011 and 2015. Potential respondents were approached in 26 locations of 8 administrative regions of Poland. To represent economic diversity, the data were obtained from locations in the regions characterized as lower in economic development (23% of locations), medium in economic development (50%), and higher in economic development (27%). Data were collected in schools and general practitioners’ offices. In each potential location, the research team visited primary schools providing education for children aged 5–11. The team also visited nurses’/general practitioners’ offices (conducting routine check-ups among children aged 5–11 years old) and discussed the possibility of data collection. Two schools (out of 27 approached) and two practitioners’ offices (out of 12 approached) did not agree to contribute to the collection of data.
The potential participants were recruited during the parent-teacher meetings, school classes, and check-up visits at the general practitioners’ offices. Mothers and children were given information about the study participation schedule and the aims of the study, and they were told that their participation would be kept confidential. Informed consent was collected from mothers (concerning their own and their child’s participation) and written assent was obtained from children. Personal codes were used to ensure confidentiality.
At T1, researchers conducted oral interviews with children aged 5–8 and those who declared that they were not good at reading or writing. Older children (aged 9–11) completed a questionnaire. Mothers provided self-report data. Data from mothers and children were collected separately. After the questionnaires/interviews were completed, child body weight and height were measured. At T2, study personnel revisited the study locations three times after contacting mothers by phone. Data were collected at two time points: the beginning of the school year (T1) and at the end of the school year (T2). Thus, dropout due to school change after the completion of a school year was limited.
The study was approved by the Ethics Committee at the first author’s institution. The respective dataset is available at https://​osf.​io/​r8qmg/​.

To determine the sample size, the G*Power calculator (Faul, Erdfelder, Lang, & Buchner, 2007) was used. Assuming small effect sizes (f2 = .03) of relations between predictors and the child BMI z-score and considering that the analyses should account for potential confounders, we estimated that the sample should include at least 624 dyads at T1.
Manifest mediation analyses (Byrne, 2010) were conducted using maximum likelihood estimation procedures (IBM AMOS 25). Missing data (including data missing due to dropouts at T2) were accounted for by using the full information maximum likelihood procedure (FIML; Byrne, 2010). Little’s MCAR test indicated that the missing data patterns were systematic, Little’s χ2(299) = 379.73, p = .001. Several fit indices were applied to assess model-data fit. We used a cut-off point < .08 for the root mean square error of approximation (RMSEA) and standardized root mean residual (SRMR), as well as a cut-off point > .90 for the comparative fit index (CFI), the Tucker-Lewis index (TLI), the goodness-of-fit index (GFI), and the normed fit index (NFI) (Byrne, 2010). The significance of indirect effects was evaluated using bias-corrected (BC) bootstrapping with 10,000 resamples and calculating the 95% confidence interval (CIBC) (MacKinnon et al., 2004). Multivariate normality was checked with Mardia’s coefficient, with values of 54.49 indicating moderate non-normality.
The hypothesized mediation model assumes that in addition to forming direct associations with the dependent variables (DVs), the independent variables (IVs) may operate through the hypothesized mediators (MacKinnon, 2008): the IV predicts the mediators, which in turn predict the DV. Two types of effects may be tested: (1) the direct effects of the IV and of the mediators on the DV and (2) the indirect effects of the IV on the DV through the mediators (MacKinnon, 2008). The hypothesized model assumed (1) direct effects of the IV (maternal perception of child body mass at T1) and effects of maternal practices (T1) on the DV (child BMI z-score) and (2) indirect effects of the IV on the DV via two sets of mediators operating sequentially, namely, (a) maternal practices (T1) and (b) child screen use and physical activity (T2). As suggested for longitudinal mediation analysis (Roth & MacKinnon, 2012), adjustments were made for the baseline (T1) effects of the mediators and the DV in the model. Furthermore, analyses included control variables that were associated with the patterns of missing data (i.e., maternal age, child screen use, and child BMI z-score). The control variables included child screen use (T1), child physical activity (T1), child BMI z-score (T1), child age and gender, maternal age (T1), maternal education (T1), and maternal perceived economic status (T1). To conduct sensitivity analysis, the model was tested without control variables (except for child BMI z-score at T1, which was included in both analyzed models).

Mothers’ ages ranged between 23 and 68 years old (M = 36.1, SD = 5.64). The majority of mothers (66.3%) had a body mass index (BMI) of 18.50–25.0 kg/m2, indicating normal body mass; 2.4% had a BMI of less than 18.50 kg/m2; 24% of mothers had a BMI of 25.00–30.00 kg/m2, indicating overweight; and 7.3% had a BMI of more than 30.00 kg/m2, indicating obesity. The majority of mothers had either secondary education (27.6%) or higher education (40.2%); 59% of mothers reported full-time employment; and 59% reported that their perceived economic status was similar to the economic status of the average family in Poland. The majority of mothers (68%) lived in urban areas. All participants were white (for a full description of sociodemographic characteristics, see Supplement 1).
Children (53.1% girls) were 5–11 years old (M = 8.42, SD = 1.35); only 0.7% were 5 years old, 9.8% were 6 years old and 89.5% were 7–11 years old. Across the majority of study variables, there were no significant differences between younger children (aged ≤ 8 years old) and older children (aged ≥ 9 years old), except for higher child body mass, older maternal age, and less frequent use of maternal monitoring of screen use in older children (Supplementary Table 1).
The majority (66.5%) of children had normal body mass, 23.6% were overweight or obese, and 9.9% were underweight when applying the International Obesity Task Force Thresholds (Cole & Lobstein, 2012). Overall, 74.3% of mothers considered their child to have normal body mass, 12.8% indicated child overweight/obesity, and 12.9% identified their children to be underweight. In dyads with measured overweight/obese children, only 41.9% of mothers perceived their child as overweight/obese, 52.9% considered their child to have normal body mass, and 5.2% indicated that their child was underweight (see Supplementary Table 2). Only 0.7% of children met physical activity recommendations (WHO, 2018) of > 60 daily minutes of moderate-to-vigorous physical activity (0.8% among children with normal body mass; 0.6% among children with overweight/obesity; see Supplementary Table 2).
Comparisons of mother-daughter and mother-son dyads yielded several significant differences (see Supplement 1). Compared to mother-daughter dyads, mother-son dyads involved mothers’ more frequent restriction of their sons’ screen use, higher levels of monitoring their sons’ screen use, and sons’ higher level of stimulation to be active. Compared to girls, boys reported higher levels of physical activity and higher levels of screen use.

This study was performed in line with the principles of the Declaration of Helsinki. Approval was granted by the Ethics Committee at SWPS University of Social Sciences and Humanities, Wroclaw, Poland. Informed consent to participate in the study was obtained from adult participants. Maternal consent for the child’s parcticipation was obtained. Children provided their assent.
Open AccessThis article is licensed under a Creative Commons Attribution 4.0 International License, which permits use, sharing, adaptation, distribution and reproduction in any medium or format, as long as you give appropriate credit to the original author(s) and the source, provide a link to the Creative Commons licence, and indicate if changes were made. The images or other third party material in this article are included in the article's Creative Commons licence, unless indicated otherwise in a credit line to the material. If material is not included in the article's Creative Commons licence and your intended use is not permitted by statutory regulation or exceeds the permitted use, you will need to obtain permission directly from the copyright holder. To view a copy of this licence, visit http://​creativecommons.​org/​licenses/​by/​4.​0/​.

Springer Nature remains neutral with regard to jurisdictional claims in published maps and institutional affiliations.
vorige artikel The separation in coordination between social- and self-regulation for emerging adults with type 1 diabetes
volgende artikel Associations between naturalistically assessed physical activity patterns, affect, and eating in youth with overweight and obesity
insite
INHOUD
share
DELEN 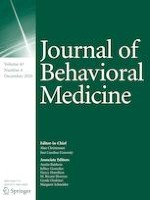 Testing the cross-stressor hypothesis under real-world conditions: exercise as a moderator of the association between momentary anxiety and cardiovascular responses