The online version of this article (https://​doi.​org/​10.​1007/​s10964-019-01095-y) contains supplementary material, which is available to authorized users.
Publisher’s note: Springer Nature remains neutral with regard to jurisdictional claims in published maps and institutional affiliations. 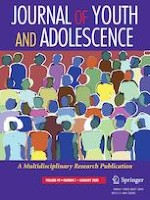 Informant Discrepancies in Internalizing and Externalizing Symptoms in an At-Risk Sample: The Role of Parenting and School Engagement