Whilst enhanced perception has been widely reported in individuals with Autism Spectrum Disorders (ASDs), relatively little is known about the developmental trajectory and impact of atypical auditory processing on speech perception in intellectually high-functioning adults with ASD. This paper presents data on perception of complex tones and speech pitch in adult participants with high-functioning ASD and typical development, and compares these with pre-existing data using the same paradigm with groups of children and adolescents with and without ASD. As perceptual processing abnormalities are likely to influence behavioural performance, regression analyses were carried out on the adult data set. The findings revealed markedly different pitch discrimination trajectories and language correlates across diagnostic groups. While pitch discrimination increased with age and correlated with receptive vocabulary in groups without ASD, it was enhanced in childhood and stable across development in ASD. Pitch discrimination scores did not correlate with receptive vocabulary scores in the ASD group and for adults with ASD superior pitch perception was associated with sensory atypicalities and diagnostic measures of symptom severity. We conclude that the development of pitch discrimination, and its associated mechanisms markedly distinguish those with and without ASD.
vorige artikel Auditory Stream Segregation in Autism Spectrum Disorder: Benefits and Downsides of Superior Perceptual Processes
volgende artikel Atypical Social Judgment and Sensitivity to Perceptual Cues in Autism Spectrum Disorders 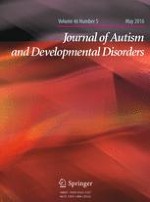