Effectiveness of music-based cognitive behavior therapy (CBT) intervention has been established on various participants such as students in secondary schools, university students, and other categories of adults. However, there is a dearth of literature on the effectiveness of music-based CBT intervention program on the management of primary school pupils’ test anxiety in basic science. Thus, this study sought the effectiveness of a music-based CBT intervention program on the management of test anxiety among pupils. A randomized controlled trial experimental design was adopted for the study using a sample of 58 primary three (3) pupils. Test anxiety questionnaire (TAQ) was adopted for data collection. TAQ was trial-tested due to the cultural differences of the participants. The internal consistency reliability of the items of TAQ was estimated to be .79 using the Cronbach alpha method, while its estimate of temporal stability index was .86 using Pearson product moment correlation. Data were analyzed using mixed-design repeated measures analysis of variance and analysis of covariance. The findings of the study revealed that music-based CBT had a significant effect on the management of test anxiety among pupils. This finding has implication for community development in the sense that test anxiety among pupils can be better managed using the music-based CBT intervention program. This will enable the children to grow better academically and contribute to the community they belong to. It was thus recommended that primary school teachers should be enlightened on how to make use of music-based CBT in the management of test anxiety among pupils.
volgende artikel The Effect of State and Trait Self-Critical Rumination on Acute Distress: An Exploratory Experimental Investigation 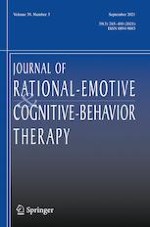 Behavioral Inhibition/Activation Systems and Self-Esteem with Depression: The Mediating Role of Social Anxiety

The Effect of State and Trait Self-Critical Rumination on Acute Distress: An Exploratory Experimental Investigation