Management and outcomes of real-world use of non-vitamin-K oral anticoagulants (NOACs) in patients with atrial fibrillation: experience of a dedicated NOAC clinic | mijn-bsl Skip to main content
TOOLBAR 1 2 3 4
ZOEKEN MENU 1 2 3 4

Current guidelines recommend non-vitamin‑K oral anticoagulants (NOACs) as the first-choice therapy for stroke prevention in patients with atrial fibrillation (AF). The use of drugs in a clinical trial setting differs from that in real-world populations. Real-world data are important to accrue more heterogeneous patient populations with respect to co-morbidities and co-medication use. The aim of this study was to evaluate the use of NOACs in daily practice in a large tertiary hospital in the Netherlands.

A single-centre prospective study was conducted among all patients with AF using a NOAC in the St. Antonius Hospital between 2013 and June 2017. The outcomes were the rates of any bleeding, stroke/transient ischaemic attack, mortality, discontinuation rate and adverse drug reactions.

We observed low rates of bleeding and adverse drug reactions. However, rates of mortality and discontinuation were relatively high. These results could possibly be explained by the real-world nature of the data including higher-risk patients. 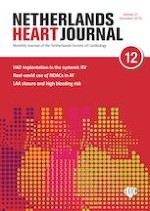 Adherence to anticoagulation: an ongoing challenge