» Naar de samenvatting
At the Congress of the European Society of Cardiology (ESC) 2013, Amsterdam, many new trials were presented at the four Hot Line Sessions. Nine of these trials were simultaneously published in the New England Journal of Medicine (NEJM). In the Scientific Supplement of the Dutch daily newspaper, the NRC, it was put forward that seven out of the nine trials produced ‘negative’ results, leading to the general comment by the NRC that the scientific progress in cardiovascular medicine has halted: ‘ there are no further successes to report in cardiology’ (NRC Weekend, September 7/8, W7).
Let’s have a short look at the nine trials reported at the ESC Congress and simultaneously published in the NEJM.

1) A positive study presented at Hot Line III and published simultaneously in the European Heart Journal was the COMPARE trial which showed that addition of losartan to standard of care (beta-blocking agents) in adults with Marfan syndrome significantly reduces aortic root dilatation rate in un-operated patients and aortic arch dilatation rate in patients after elective aortic root surgery. 2) The PURE (Prospective Urban Rural Epidemiological) study in over 150,000 individuals (Hot Line III), clearly showed an inverse relationship between risk factors for heart disease and actual rates of prevalence. 3) A Finnish study showed that exercise was beneficial to men with poor fitness; in 2656 men it was demonstrated that increasing the level of exercise protects again sudden cardiac death. 4) Along those lines, French participants of the Tour de France between 1947 and 2012 showed a substantially lower (41 %) mortality compared with the general male French population, again emphasising that (even strenuous) exercise should be encouraged (Hot Line IV). 5) The CONFIRM study (Coronary CT Evaluation for Clinical Outcomes) showed that active and past smokers have a twofold risk of CAD in all three coronary arteries assessed by coronary CT. 6) With respect to aortic valve stenosis, it was shown that individuals with first-degree relatives with aortic valve disease have twice the risk to develop the condition, and that following TAVI female gender was associated with improved survival. 7) The Dutch FollowPace study showed similar survival in pacemaker recipients without concomitant cardiovascular disease as in age- and sex-matched controls in the general Dutch population. 8) The IN-TIME trial (Hot Line II) clearly showed the benefits of home-monitoring in heart failure patients, with less worsening in clinical status and improved all-cause and cardiovascular mortality. 9) In the Dutch North Holland region an emergency care program was introduced 5 years ago, involving CPR and AED training to the public, whereby the time from first emergency call has been reduced to 8 min and the overall survival rates from out-of-hospital arrest have increased to 23 %. 10) Finally, the protein copeptin (added to troponin) proved to be a new promising biomarker to triage patients with ACS. These are just a few examples of scientific progress in the cardiovascular world based on the data presented at the 2013 ESC Congress.
As mentioned above, the almost definite proof of the value of a study is incorporation into the guidelines. At the ESC Congress 2013 four new guidelines were presented on a variety of topics; 1) Cardiac Pacing, 2) Diabetes, 3) Hypertension, and 4) Stable Coronary Artery Disease (SCAD). The SCAD guideline, for example, includes 514 references; it would be interesting to find out which of the previously presented Hot Line trials have finally made it into this guideline.
To conclude, the NRC newspaper of 7/8 September was much too negative and should become more neutral in order to report the really positive findings in cardiovascular medicine. Where a heart beats, there is never a standstill!
Open Access This article is distributed under the terms of the Creative Commons Attribution License which permits any use, distribution, and reproduction in any medium, provided the original author(s) and the source are credited. 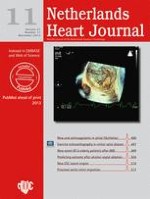 Atrial fibrillation: A kiss of death?