Thirty-three undergraduates participated in this study (18 men and 15 women). The mean age was 20.68 years (SD = 2.89, range 18–47). Participants (contacted by email or phone) were told that they would see a shocking film fragment with possible distressing effects. Following recruitment, they were randomly allocated into either a “diary group” or a “control group”. Seventeen participants (eight men, nine women) were included in the diary group and sixteen participants were included in the control group (10 men, six women). All participants gave their written informed consent to take part. The University of Groningen Behavioral Research Ethical Committee granted ethics approval for this study.

The experimental manipulation used in this study consisted of a 9-min fragment of “Irreversible” produced by Gaspar Noé. This film contains shocking and gruesome images of a brutal murder in a dark nightclub with very explicit and extreme violence. Subjects were not acquainted with the film before seeing the fragment. With respect to possible negative side effects of showing a film with a shocking content, participants were explicitly informed during recruitment and the experimental session prior to viewing the video that the film contained extreme violence and that they could leave the room and terminate the experiment at any point. The fragment was projected on a large (150 × 120 cm) screen in a darkened room.

Attention and distress
In order to measure the amount of attention paid to the film fragment, participants rated the percentage of time they had looked away from the screen (0 = not at all – 100 = all of the time). They also reported on a 100 mm Visual Analog Scale (VAS; 0 = not at all –100 = extremely) how much distress they experienced while viewing the fragment.
Attentional control
In this study, we used a Dutch translation of the Attentional Control Scale (ACS, Derryberry & Reed 2002; Verwoerd et al. 2006).The ACS is a 20-item self-report measure which measures attentional focusing (i.e., the ability to focus attention on one task: “When I need to concentrate and solve a problem, I have trouble focusing my attention”) and attentional shifting (i.e., the ability to shift attention from one task to another and to engage in dual task behavior: “It is easy for me to alternate between two different tasks”). Scores on the ACS can range from 20 to 80 and the response format uses a four-point scale (1 = almost never; 2 = sometimes; 3 = often; 4 = always), higher scores indicating good attentional control. The internal consistency of the ACS was found to be acceptable in the present sample (Cronbach’s α = 0.71).
Neuroticism
Neuroticism was measured with the Five Factor Personality Inventory (FFPI; Hendriks, Hofstee & de Raad 1999) which is a self-report questionnaire for measuring the five super ordinate factors of temperament. The emotional stability scale of the FFPI consists of 20 items (e.g., “Is afraid to do something wrong”) answered on a five-point scale (1 = does not at all apply to me, 5 = does very much apply to me). For half of the items, the direction was reversed, so that higher scores would indicate higher neuroticism. The internal consistency of the emotional stability scale used in this study was high (Cronbach’s α = 0.93).
Diary
Participants in the diary group were asked to use an A5-format diary to record any intrusions of the films during the four days following the film (e.g., Brewin & Saunders 2001; Davies & Clark 1998; Holmes et al. 2004). They noted each intrusion’s content (“Describe the content of your intrusion.”) and rated the percentage of distress associated with experiencing the intrusion (0 = no distress – 100 = high levels of distress). Elaborate verbal and written instructions were given about the nature of unwanted intrusions and how to keep the diary. As in re-experiencing symptoms in PTSD, intrusions were defined as “spontaneously occurring” (not intentional) memories of the film (see Holmes et al. 2004). Participants were asked to carry the diary with them and to record every intrusive memory related to the film fragment as soon as possible. The main dependent variable was the total number of intrusions reported in the diary. At follow up, participants had to fill in a diary compliance rating. They were asked to rate on a 100 mm VAS scale how well they had been able to keep track of their intrusions in the diary (0 = not at all – 100 = very good).
Impact of Event Scale
A modified Dutch version of the Impact of Event Scale (IES; Horowitz et al. 1979; see van der Ploeg et al. 2004) instructed participants to respond to statements related to the film fragment they had been shown a few days earlier (e.g., images came up spontaneously). The modified scale consisted of 11 items answered on a five-point scale (range: 0–55), with assigned item weights of 0, 1, 3, 5. The internal consistency of this scale was found to be high (Cronbach’s α = 0.89).

Participants were recruited from fellow students and friends of five research assistants who had to finish a second year research practical. In the week following the randomization, all participants filled in the ACS and were informed (by email or phone) about the time and day they were expected to participate in the experiment. Both the diary group and the control group watched the distressing fragment in group sessions on separate hours of the same day at the beginning of the week. Upon arrival at the test room, participants gave informed consent. After this, they were asked to fill in the neuroticism scale and were instructed that they could leave the room at any time. Before starting the distressing fragment, the experimenter gave instructions not to talk with each other and to avoid looking away as much as possible. Directly after viewing the film, participants rated the amount of attention they had paid to the film and how much distress they had experienced during the fragment. After this, participants in the diary group were instructed in the use of the 4-day diary while participants in the control group were only asked to come back after four days. The follow-up was conducted four days after the experimental manipulation. Participants in the diary group delivered their diaries and completed the diary compliance rating. All participants filled in the IES. Before leaving, the experimenter debriefed the participants about the purpose of the study.

Hierarchical multiple regression analysis (HMR) was used to examine the main research questions of the predictive value of attentional control and the possible moderating role of using a diary on IES-scores at follow up. In the first step of this analysis, the variable group (1 = diary, 0 = control) was included as a dummy variable, together with the attentional control scale. In the second step of the analysis, the moderating role of using a diary was tested by forcing the normalized product (interaction) of attentional control and group into the equation. In order to avoid further lowering of the participants/predictor ratio of the regression model, additional analyses used partial correlations to examine any mediating effects of neuroticism.

One participant reported that she did not understand the questions on the neuroticism scale. Therefore, the analyses with neuroticism were conducted without this participant.

Mean, standard deviation and range of the main variables are shown in Table 1. The two groups (diary and control) did not differ on measures of attentional control or neuroticism and the percent of time looked away from the stressful fragment. Both groups also rated the distressing fragment as moderately emotional.
Table 1 General statistics (mean, standard deviation [SD] and range) of the main variables in the diary and control group
Emotionality emotionality ratings directly after viewing the film fragment, Percent of time looked away percent of time participants looked away from the film fragment, IES Impact of Event Scale

The HMR analysis with the IES as dependent variable, resulted in a significant 28% of explained variance in first step of the model, F (2, 30) = 5.85, p < 0.01. Within this first step, the dummy variable group (diary, control), was a strong predictor of the variance in IES scores, β = 0.50, p < 0.01. Participants who filled in a diary during the four days after viewing the distressing film fragment reported considerably more intrusions at follow-up (M = 11.47, SD = 10.91) than people in the control group (M = 4.06, SD = 4.41). However, the contribution of attentional control did not reach conventional levels of significance, β = −0.24, t (31) = −1.54, p  = 0.14. The second step containing the interaction term between group and attentional control added a significant 9% to explained variance, F-change (1, 29) = 4.23, p < 0.05. To further explore this interaction term, separate Pearson correlations between IES scores and attentional control were computed for the diary and the control group. It appeared that for participants who filled in a diary, self-reported attentional control strongly predicted follow up IES scores [r(17) - −.57, p < .05]. In contrast, individual differences in attentional control for the participants in the control group did not have any predictive value for the later reported intrusive memories at follow-up [r(16) = 0.05, p = 0.87].

Pearson correlations between neuroticism and IES-scores at follow-up

As shown in Table 2, the relationship between attentional control and neuroticism appeared to be moderately high [r(32) = −0.42, p < 0.05]. Furthermore, as expected, neuroticism was strongly associated with IES-scores at follow up [r(32) = 0.51, p < 0.01]. In general, there was a moderate to strong tendency for people with relatively high scores on neuroticism to experience a relatively high frequency of intrusive memories.
Table 2 Pearson correlations between the main variables used in the present study
IES Impact of Event Scale, Emotionality emotionality ratings directly after viewing the film fragment.
*p < 0.05; **P < 0.01

Since there was no significant association between attentional control and IES scores in the control group, all subsequent analyses are restricted to the diary group.
The results showed that, after controlling for neuroticism, there was still a trend towards significance for the correlation between attentional control and IES-scores at follow-up, [pr(13) = −.50, p = 0.058]. Additionally, the unique relationship between attentional control and the number of intrusive memories recorded in the diary was of considerable magnitude and in the same direction, although it failed to reach conventional levels of significance [pr(13) = −0.43, p = 0.11]. Taken together, these results suggest that weakened attentional control has independent predicting validity (over and above neuroticism) for the frequency of intrusive memories after an experimentally induced stressful situation. However, this predictive relationship was only evident in the group that used a diary as a method for the registration of intrusive memories. 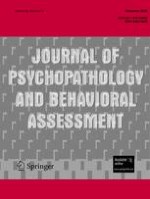