Nightmares are defined as dreams with strong negative emotions which awaken the dreamer and are common during childhood: cross-sectional data shows the highest prevalence rates between the ages of five and ten. The present longitudinal study was designed to study the stability of nightmares over the course of 2 years. Sleep questionnaires and Strengths and Difficulties Questionnaires were completed by 851 10-years-old children and their parents, separately. In the total sample, nightmares occurred often in 2.5% (parental estimates) to 3.5% (self estimates of the children). The findings indicate that nightmare stability is considerably high, i.e., nightmare occurrence was predicted by the prevalence the year before (in addition to the concurrent amount of emotional symptoms). Children with ‘chronic’ nightmares showed more psychopathological symptoms. It would be interesting to follow-up these children in order to investigate whether childhood nightmares are also predictive for adult psychopathology.
vorige artikel Early-onset Psychoses: Comparison of Clinical Features and Adult Outcome in 3 Diagnostic Groups
volgende artikel Exposure to Potentially Traumatic Life Events in Children with Special Needs 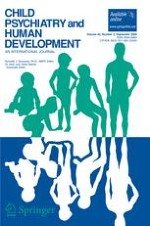