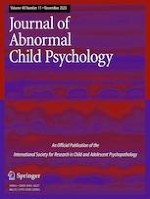 The Structure of Psychopathology in a Sample of Clinically Referred, Emotionally Dysregulated Early Adolescents

Correction to: Promises and Pitfalls of Latent Variable Approaches to Understanding Psychopathology: Reply to Burke and Johnston, Eid, Junghänel and Colleagues, and Willoughby

Relations Among Anxious Solitude, Peer Exclusion, and Maternal Overcontrol from 3rd Through 7th Grade: Peer Effects on Youth, Youth Evocative Effects on Mothering, and the Indirect Effect of Peers on Mothering via Youth

Correction to: Heterogeneous Trajectories of Problematic Alcohol Use, Depressive Symptoms, and their Co-Occurrence in Young Adults with and without Childhood ADHD