Children and adolescents exposed to multiple contextual risks are more likely to have academic difficulties and externalizing behavior problems than those who experience fewer risks. This study used data from the Northern Finland Birth Cohort 1986 (a population-based study; N = 6961; 51 % female) to investigate (a) the impact of cumulative contextual risk at birth on adolescents’ academic performance and misbehavior in school, (b) learning difficulties and/or externalizing behavior problems in childhood as intervening mechanisms in the association of cumulative contextual risk with functioning in adolescence, and (c) potential gender differences in the predictive associations of cumulative contextual risk at birth with functioning in childhood or adolescence. The results of the structural equation modeling analysis suggested that exposure to cumulative contextual risk at birth had negative associations with functioning 16 years later, and academic difficulties and externalizing behavior problems in childhood mediated some of the predictive relations. Gender, however, did not moderate any of the associations. Therefore, the findings of this study have implications for the prevention of learning and conduct problems in youth and future research on the impact of cumulative risk exposure.
vorige artikel Substantiated Childhood Maltreatment and Intimate Partner Violence Victimization in Young Adulthood: A Birth Cohort Study
volgende artikel Correlates of Childhood vs. Adolescence Internalizing Symptomatology from Infancy to Young Adulthood 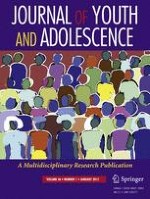 The Role of Perceived Stress and Self-Efficacy in Young People’s Life Satisfaction: A Longitudinal Study

A Variable-Centered and Person-Centered Evaluation of Emotion Regulation and Distress Tolerance: Links to Emotional and Behavioral Concerns