Grounded on transactional models of psychopathology, the aim of the present study was to examine whether there are bidirectional long-term predictive associations between mindfulness facets, maladaptive schemas, and depressive symptoms during adolescence.

A sample of 855 students (417 girls, Mage = 14.60, SD = 1.00) was assessed at three time points separated by 6 months. They completed the Short Form of the Five Facet Mindfulness Questionnaire, the disconnection/rejection domain of Young Schema Questionnaire, and the Center for Epidemiologic Studies Depression Scale.

These findings support the use of transactional models and the inclusion of bidirectional relationships in explanatory models of psychopathology. Furthermore, depressive symptoms and cognitive vulnerabilities can worsen mindfulness facets in adolescents. 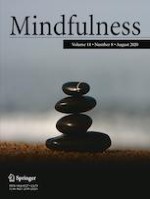 The Root Causes of COVID-19 Screech for Compassion

The Influence of Anxiety and Mindfulness on Relationship Quality: an Investigation of Comparative and Dyadic Effects