Only parents of whom data was available on at least two measurement moments were included in the analyses. This resulted in a final sample of 335 mothers and 261 fathers and their children (81.9 % of the mothers and 81.8 % fathers who originally agreed to participate). Little’s Missing Completely At Random test (1988) revealed a normed Chi-Square (χ2/df) of 1.85 and 0.44 for mother and father data, respectively. This indicates a good fit between sample scores with and without imputation according to guidelines by Bollen (1989). Therefore, missing data were imputed with multiple imputation generating 10 complete datasets for conducting analyses in IBM SPSS Statistics 22. At baseline (i.e., 26 weeks of pregnancy mothers and fathers were on average 31.7 (SD = 4.23, range 17–43) and 34.2 (SD = 4.47, range 23–50) years old. Most parents were highly educated, as 65.4 % of the mothers and 67.3 % of the fathers had 9 or more years of education after primary school. Furthermore, 83.2 % of the mothers and 85.0 % of the fathers were Dutch. Children (49.6 % boys, 55.8 % firstborns) were born at a mean gestational age of 39.8 (SD = 1.6) weeks and a mean birth weight of 3427.8 (SD = 538.5) grams. All parents signed informed consent before participating in the study. This study has been approved by the medical ethics committee of the St. Elisabeth hospital in Tilburg, the Netherlands (date: 13-08-2008, registration number: NL 23376.008.08).

The present study is embedded in the prospective longitudinal cohort study ‘Expectant Parents’, which focuses on prenatal (risk) factors of postnatal child development, parenting, and parent-infant relationships. Detailed information regarding design and procedure of the study has been described elsewhere (Maas et al. 2012). In the current study, maternal and paternal bonding were assessed via postal questionnaires at 26 weeks of pregnancy, and at 6 months and 24 months postpartum. At 24 months, parents completed a questionnaire about parenting stress. Mothers also filled in a questionnaire about child executive functioning problems. Portions of the data used in the current study have been published before (de Cock et al. 2016). In this previous study, parental pre- and postnatal bonding was studied in association with multiple correlates in the parent- child- and contextual domain. However, parental bonding was studied by means of person-centered methods, which provided (four) patterns of bonding, instead of separate pre-and postnatal bonding variables as examined in the current study.

To assess parenting stress at 24 months an abbreviated, Dutch validated version of the Parenting Stress Index (Abidin 1983), the Nijmeegse Ouderlijke Stress Index, was used (NOSI-K; De Brock et al. 1992). The NOSI-K consists of 25 items which are rated from 1 (totally disagree) to 6 (totally agree), with higher scores indicating more parenting stress. Scores on all items were summed up to obtain a total score of experienced parenting stress. An example item is “Parenting this child is harder than I thought”. In the present study internal consistency of the NOSI-K for mothers and fathers was high (Cronbach’s alphas of .90 and .91 respectively).

At approximately 24 months (M = 23.7, SD = 0.77, range 23–27), child executive functioning problems were assessed with the Behavior Rating Inventory of Executive Function-Preschool Version (BRIEF-P; Gioia et al. 2003), which was developed and validated for children aged 2–5 years. In the present study, mothers completed this instrument. For 63 items, mothers were asked to indicate how often (never, sometimes, often) the mentioned behavior of their child has been a problem during the past 6 months. Scores on a Likert scale ranged from 1–3, with higher scores indicating more executive functioning problems. In the current study the BRIEF-P total score (i.e., sum score of all items) was used as in preschool-aged children executive functioning skills are still intertwined and difficult to separate into different components (Espy 2004; Isquith et al. 2004). An example item of the BRIEF-P is “Has trouble with activities or tasks that have more than one step”. Internal consistency of the BRIEF-P total score was found to be strong in the present study (Cronbach’s alpha = .93).

To examine the bivariate associations between all study variables, Pearson correlation analyses were conducted in IBM SPSS Statistics 22. In addition, a series of path models was performed in MPlus 7 (Muthén and Muthén 1998‐2015) to examine the associations between parental bonding and parenting stress, and between parental bonding, parenting stress, and executive functioning. This was done for mothers and fathers separately. By using path models, multiple measurement occasions of parental bonding could be taken into account in one model predicting parenting stress. In addition, the possible mediating role of parenting stress in the association of parental bonding at 6 months and child executive functioning at 24 months could be examined within one path model, controlling for a possible mediating effect of parental bonding at 24 months. Missing values were handled by Full Information Maximum Likelihood (FIML) estimation. First, completely saturated models with all variables included were run. Covariates (gestational age, gender, parental age, parental education) were added to all the path models as predictors of the outcome variables. However, these covariates had no significant effect and did not alter the results of the models. Next, all non-significant paths (including covariates) were trimmed from the models, in line with other studies in the same research area (e.g., Östberg and Hagekull 2000), which made it possible to assess model fit. Final models with significant associations are presented and interpreted.

All procedures performed in studies involving human participants were in accordance with the ethical standards of the institutional and/or national research committee and with the 1964 Helsinki declaration and its later amendments or comparable ethical standards. This study has been approved by the medical ethics committee of the St. Elisabeth hospital in Tilburg, the Netherlands (date: 13-08-2008, registration number: NL 23376.008.08).

Informed consent was obtained from all individual participants included in the study.
This article is distributed under the terms of the Creative Commons Attribution 4.0 International License (http://​creativecommons.​org/​licenses/​by/​4.​0/​), which permits unrestricted use, distribution, and reproduction in any medium, provided you give appropriate credit to the original author(s) and the source, provide a link to the Creative Commons license, and indicate if changes were made.
vorige artikel Parental Attributions of Control for Child Behaviour and Their Relation to Discipline Practices in Parents of Children with and Without Developmental Delays
volgende artikel Bringing Work Home: Gender and Parenting Correlates of Work-Family Guilt among Parents of Toddlers
insite
INHOUD
share
DELEN 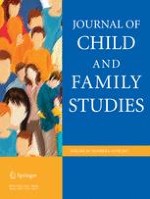