To compare long-term (4–10 years) quality of life (QoL) of men with low-risk prostate cancer (PCa) treated by different modalities and a reference group without PCa.

In this cross-sectional study, four groups were sent a one-time QoL-questionnaire; PCa patients (1) following the structured Prostate cancer Research International Active Surveillance protocol, (2) who underwent radical prostatectomy (RP) in the context of the European Randomized study of Screening for Prostate Cancer—section Rotterdam, (3) who underwent radiotherapy (RT) at an academic hospital in The Netherlands, and (4) an age-matched reference group of men without PCa. The QoL-questionnaire addressed prostate-specific health (EPIC), generic health (SF-12), and anxiety (STAI-6). Statistical significance (p ≤ 0.05) and clinical relevance (≥0.5 SD) of differences between groups were assessed.

Prostate-specific function of AS-men was significantly better than that of RP-men. When comparing AS to RT, a borderline significant difference in sexual function was seen. Men who followed an AS strategy for a long-term period were not anxious and accepted it well, suggesting that AS may be a good treatment option for men with low-risk PCa.

Men diagnosed with low-risk prostate cancer (PCa) generally have three therapy options: radical prostatectomy (RP), radiotherapy (RT), or active surveillance (AS). Curative therapies, like RP and RT, are associated with side-effects, such as incontinence and impotence, while AS is aimed at deferring such side-effects by opting for an initial monitoring strategy [1]. With AS initial curative therapy is delayed, or avoided, and replaced by regular follow-up visits using prostate-specific antigen (PSA), digital rectal examination (DRE), prostate biopsy, and—potentially—magnetic resonance imaging (MRI). Choosing AS, however, requires living with untreated cancer and coping with the possibility of missing the ‘window of curability’.
AS is reported to be safe [2, 3]. In a 15-year time frame, among men that underwent AS in the Sunnybrook cohort, 2.8% developed metastases and 1.5% died of PCa; this mortality rate being consistent with that of favourable-risk patients managed with the initial curative therapy [4]. AS is now included in many guidelines as a treatment option for men diagnosed with low-risk PCa, and over the years, the number of men choosing AS has been rising [2, 3, 5‐7]. The need to understand the effect of AS on well-being of men is becoming more apparent now.
In a recent systematic review, Bellardita and colleagues concluded that, so far, no major perturbations in the health-related quality of life (QoL) and psychological well-being of men on AS were seen over a follow-up period of 9–36 months [8]. However, QoL research amongst men on AS is still scarce compared to RP and RT QoL research, and current AS studies show some methodological drawbacks like the infrequent use of comparator groups, the lack of an appropriate non-cancer control group, and the use of various QoL measures which hinders comparison of QoL across treatment groups [8‐10]. Furthermore, long-term patient reported outcomes are scarce. We aim to fill this gap by assessing long-term, i.e. 4–10 year, QoL of men with low-risk PCa who were either treated with AS, RP, or RT. We included an age-matched group of men without PCa as a reference group. All groups completed the same set of QoL measures. With the outcomes of this study, we would like to support patients and clinicians in weighing the advantages and disadvantages of therapies for low-risk PCa in terms of QoL, enabling an upfront informed treatment-choice which better reflects patients’ expectations and preferences relating to (side) effects of treatment [11].

Measures included in the questionnaire

A set of validated measures was used to evaluate prostate-specific health (Expanded Prostate cancer Index Composite—EPIC), generic health (Short-Form Health-Survey—SF-12, EQ visual analogue scale—EQ-VAS), and generic anxiety (State-Trait Anxiety Inventory—STAI-6).
The EPIC [15, 16] includes 21 items on function and bother in the urinary, bowel, and sexual domains with scores ranging from 0 to 100. Higher scores reflect better functioning. Because incontinence is more related to RP and irritative/obstructive symptoms are more related to RT, we also assessed the incontinence and irritative/obstructive subscales [16]. We furthermore report distinctive items from the urinary and sexual domains because of their relevance in daily clinical practice for both patient and physician.
The SF-12 consists of 12 items with which the physical (PCS) and the mental component summary score (MCS) can be calculated, both ranging from 0 to 100, with 100 indicating best health [17]. In addition, the EQ-VAS was used, recording self-rated health on a vertical ‘thermometer’ with endpoints labelled as 100, indicating ‘best imaginable health state’ and 0, indicating ‘worst imaginable health state’ [18].
Finally, generic anxiety scores assessed through the STAI-6 range from 20 to 80; a higher score indicates more anxiety. An individual is considered highly anxious in case of a STAI-6 score ≥44 [19, 20].

We report mean and standard deviation (SD) of patient reported outcomes per group. First, the significance of differences in terms of QoL and symptoms between all groups were tested using ANOVA. To assess which groups were statistically significantly different from each other, the ANOVA Tukey post hoc test was performed. Exploring differences further, we compared outcomes between the three treatment groups using ANCOVA (Bonferroni post hoc test), including the covariates age, PSA at diagnosis, cTstage, Gleason score, and follow-up time. P values (two-sided) ≤0.05 were considered statistically significant. The clinical relevance of observed differences was assessed with differences ≥0.5 SD considered clinically relevant [21]. Analyses were performed with SPSS, version 21 (IBM, Armonk, NY, USA).

This study was funded by the Prostate Cancer Research Foundation, Rotterdam, The Netherlands.

All procedures performed in studies involving human participants were in accordance with the ethical standards of the institutional review board (MEC 2014-596) and with the 1964 Helsinki declaration and its later amendments or comparable ethical standards.

Informed consent was obtained from all individual participants included in the study.
Open AccessThis article is distributed under the terms of the Creative Commons Attribution 4.0 International License (http://​creativecommons.​org/​licenses/​by/​4.​0/​), which permits unrestricted use, distribution, and reproduction in any medium, provided you give appropriate credit to the original author(s) and the source, provide a link to the Creative Commons license, and indicate if changes were made.
vorige artikel Patient versus general population health state valuations: a case study of non-specific low back pain
insite
INHOUD
share
DELEN 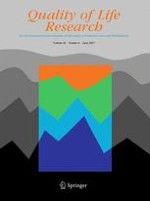 Quality of life and uncertainty in Crohn’s disease

Framing of mobility items: a source of poor agreement between preference-based health-related quality of life instruments in a population of individuals receiving assisted ventilation