The results contribute to the literature on the co-occurrence of loneliness, social anxiety, and depressive symptoms by showing that these internalizing problems can be best represented as interrelated, but distinguishable constructs.

Based on our findings, examining loneliness, social anxiety, and depressive symptoms in separate research lines seems justified. Statistical techniques examining co-development over time for these internalizing problems can be used with confidence in future research. 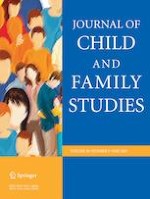 Understanding of Emotions and Empathy: Predictors of Positive Parenting with Preschoolers in Economically Stressed Families