A robust literature links childhood sexual abuse (CSA) to later substance use and sexual risk behavior; yet, relatively little empirical attention has been devoted to identifying the mechanisms linking CSA to risky behavior among youth, with even less work examining such processes in boys. With the aim of addressing this gap in the literature, the current study examined the indirect effect of childhood sexual abuse (CSA; from age 2 to 12) trajectory group on risky behavior at age 14 (alcohol use & sexual intercourse) via the intervening role of caregiver-reported internalizing and externalizing problems at age 12. Analyses were conducted with a subsample of youth (n = 657 sexual intercourse; n = 667 alcohol use) from the Longitudinal Studies of Child Abuse and Neglect (LONGSCAN), a multisite prospective study of youth at risk for maltreatment. For boys and girls, there was an indirect effect from CSA to sexual intercourse through externalizing problems. The same pattern emerged for alcohol use, but only for girls. Findings did not support an indirect path through internalizing problems for either boys or girls for either outcome. Findings suggest more focal targets for prevention efforts aimed at maintaining the health and safety of maltreated boys and girls during the adolescent transition.
vorige artikel Economic Disadvantage and Young Children’s Emotional and Behavioral Problems: Mechanisms of Risk
volgende artikel Functional Gastrointestinal Symptoms in Children with Anxiety Disorders 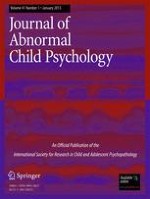 Testing Informant Discrepancies as Predictors of Early Adolescent Psychopathology: Why Difference Scores Cannot Tell You What You Want to Know and How Polynomial Regression May

Individual Differences in the Development of Self-Regulation During Pre-adolescence: Connections to Context and Adjustment