The aim of this study was to determine whether some effects of childhood lifestyles at 3 years of age are associated with quality of life (QOL) in first-year junior high school students (JHSS).

Lifestyles including sleep, physical activity and dietary habits of 9,674 3-year-old children were obtained by questionnaire between 1992 and 1994. Assessments were undertaken with the Dartmouth Primary Care Co-operative Project charts in 9,574 first-year JHSS in 2002. Logistic regression analyses were used to explore the relationship between lifestyle in early childhood and QOL in first-year JHSS for the follow-up subjects.

Early childhood lifestyle factors, especially dietary habits, at 3 years of age have significant effects on QOL in first-year JHSS. This suggests that interventions as early as 3 years of age should be considered.
vorige artikel Is parental rearing an associated factor of quality of life in adulthood?
volgende artikel Impact of cognitive and physical impairment on carer burden and quality of life 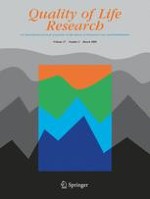 Validation of the Japanese version of EORTC QLQ-CR38

The feasibility and responsiveness of the health utilities index in patients with early-stage breast cancer: A prospective longitudinal study

Effectiveness of health-related quality-of-life measurement in clinical practice: a prospective, randomized controlled trial in patients with chronic liver disease and their physicians