A cornerstone of the task switching literature is the finding that task performance is typically slower and more error-prone when the task switches than when it repeats. So far, deception research has largely ignored that such cognitive switch costs should also emerge when switching between truth telling and lying, and may affect the cognitive cost of lying as reflected in higher prefrontal brain activity and slower and less accurate responding compared to truth telling. To get a grasp on the relative size of the switch costs associated with lying and truth telling, the current study had participants perform a reaction time-based deception task, in which they alternated between lying and telling the truth to yes/no questions that were related to activities performed in the lab (Experiment 1) or neutral autobiographical facts (Experiment 2). In both experiments, the error and reaction time switch costs were found to be equally large for switching from truth telling to lying and from lying to truth telling. This symmetry in switch costs can be explained from the hypothesis that lying requires a first step of truth telling, and demonstrates that task switching does not contribute to the cognitive cost of lying when the repetition/switch ratio is balanced. Theoretical and methodological implications are considered. 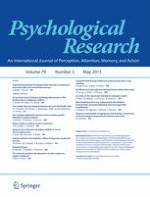 Selective attention and recognition: effects of congruency on episodic learning

Aging increases distraction by auditory oddballs in visual, but not auditory tasks