Levels of Personality Functioning Questionnaire (LoPF-Q 12–18) is a scale developed for adolescents to assess impairments in personality functioning inspired by criterion A in the Alternative Models for Personality Disorder (AMPD) in DSM-5 and the upcoming ICD-11. In this study, we aim to evaluate the validity and reliability of a Turkish culture-adaption of LoPF-Q 12–18. The study was conducted with a student (n = 282) and a clinical sample (n = 52), 41% of the participants were male, and 59% were female. The questionnaire showed good scale reliability alpha and a sound unidimensional factor structure build of four scales of functioning: Identity, Self-direction, Empathy, and Intimacy. Aspects of convergent and discriminant validity were evaluated using the Strengths and Difficulties Questionnaire (SDQ). There were medium to strong positive relationships between the LoPF-Q 12–18 and the SDQ scores reflecting pathology in line with theory. Clinical validity could be demonstrated, the LoPF-Q 12–18 total score differed significantly and with a large effect size of 1.2 standard deviations between the school sample and a sample of N = 25 patients with diagnosed PD. In general, our results support the validity of the Turkish version of the LoPF-Q 12–18 and emphasize the benefits of using the dimensional severity concept for the classification of personality disorders already in adolescence.
vorige artikel Personality Pathology and Substance Misuse in Later Life: Perspectives from Interviewer-, Self-, and Informant-Reports
volgende artikel Profiles of Rater Dis/Agreement within Universal Screening in Predicting Distal Outcomes 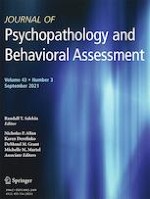 A Comparison of Psychopathic Trait Latent Profiles in Service Members

Teacher Nominations of Preschool Children at Risk for Mental Health Problems: how False Is a False Positive Nomination and What Make Teachers Concerned?