Remembering to perform a delayed intention is referred to as prospective memory (PM). In two studies, participants performed an Eriksen flanker task with an embedded PM task (they had to remember to press F1 if a pre-specified cue appeared). In study 1, participants performed a flanker task with either a concurrent PM task or a delayed PM task (instructed to carry out the intention in a later different task). In the delayed PM condition, the PM cues appeared unexpectedly early and we examined whether attention would be captured by the PM cue even though they were not relevant. Results revealed ongoing task costs solely in the concurrent PM condition but no significant task costs in the delayed PM condition showing that attention was not captured by the PM cue when it appeared in an irrelevant context. In study 2, we compared a concurrent PM condition (exactly as in Study 1) to a PM forget condition in which participants were told at a certain point during the flanker task that they no longer had to perform the PM task. Analyses revealed that participants were able to switch off attending to PM cues when instructed to forget the PM task. Results from both studies demonstrate the flexibility of monitoring as evidenced by the presence versus absence of costs in the ongoing flanker task implying that selective attention, like a lens, can be adjusted to attend or ignore, depending on intention relevance.
vorige artikel Influence of verbal instructions on effect-based action control
volgende artikel Activation of context-specific attentional control sets by exogenous allocation of visual attention to the context? 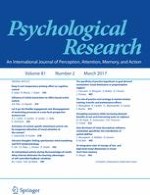 Disrupting monotony while increasing demand: benefits of rest and intervening tasks on vigilance

Embodied perspective-taking indicated by selective disruption from aberrant self motion

Measuring the emotion-specificity of rapid stimulus-driven attraction of attention to fearful faces: evidence from emotion categorization and a comparison with disgusted faces