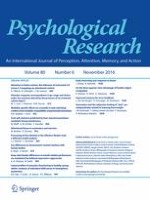 On the three-quarter view advantage of familiar object recognition

Attention to future actions: the influence of instructed S-R versus S-S mappings on attentional control