Is quality of life after mastectomy comparable to that after breast conservation surgery? A 5-year follow up study from Mumbai, India | mijn-bsl Skip to main content
ZOEKEN MENU 1 2 3 4

Breast cancer is the commonest cancer in women worldwide. Surgery is a central part of the treatment. Modified radical mastectomy (MRM) is often replaced by breast conserving therapy (BCT) in high-income countries. MRM is still the standard choice, in low- and middle-income countries (LMICs) as radiotherapy, a mandatory component of BCT is not widely available. It is important to understand whether quality of life (QOL) after MRM is comparable to that after BCT. This has not been studied well in LMICs. We present, 5-year follow-up of QOL scores in breast cancer patients from India.

We interviewed women undergoing breast cancer surgery preoperatively, at 6 months after surgery, and at 1 year and 5 years, postoperatively. QOL scores were evaluated using FACT B questionnaire. Average QOL scores of women undergoing BCT were compared with those undergoing MRM. Total scores, domain scores and trends of scores over time were analyzed.

We interviewed 54 women with a mean age of 53 years (SD 9 ± years). QOL scores in all the women, dipped during the treatment period, in all subscales but improved thereafter and even surpassed the baseline in physical, emotional and breast-specific domains (p < 0.05) at 5 years. At the end of 5 years, there was no statistically significant difference between the MRM and BCT groups in any of the total or domain scores.

QOL scores in Indian women did not differ significantly between MRM and BCT in the long term. Both options are acceptable in the study setting.
Opmerkingen

With two million new cases and over half a million deaths each year, breast cancer is the most common cancer in women worldwide [1]. Advanced stage at presentation and the lack of timely access to high-quality, affordable cancer treatment remain key barriers to improved cancer survival in limited resource settings such as India [2].
Surgery is central in breast cancer treatment and two main options for breast cancer surgery exist; mastectomy and breast conserving surgery. Mastectomy with axillary dissection is a much extensive surgery compared to conservation of breast with sentinel lymph node biopsy practiced in high-income countries (HICs). Breast conserving surgery together with postoperative radiation therapy shows similar results in terms of survival to mastectomy [3, 4]. Several prospective long-term studies on quality of life (QOL) after breast surgery carried out in HICs have shown that body image-related QOL scores are better in the patients undergoing breast conservation surgery than in those who undergo mastectomy. Mastectomy being a much extensive surgery is expected to result in poorer QOL [5, 6]. Consequently, breast conservation surgery is promoted in HICs.
Breast cancer remains first ranked cancer in women in India, with 160,000 new cases and 87,000 deaths per year [7]. Mastectomy remains the mainstay of breast cancer surgery in India as well as many other Asian and African countries, where access to radiotherapy (RT) is extremely limited and the training in breast conservation surgery has not been widely implemented [8, 9]. It has been well documented that the choice of surgical treatment modality does not affect the survival in the long term, but similar  studies comparing QOL between modified radical mastectomy (MRM) and breast conserving therapy (BCT) are few from low- and middle-income countries (LMICs). In addition, there is a lack of information about trends in QOL over time in breast cancer patients following surgery [10, 11].
The present study investigated time trends in QOL up to 5 years postoperatively after breast conserving surgery versus mastectomy in an Indian population. This information can be used to tailor the treatment suitable to available expertise and resources in this low-resource setting.

India, a lower middle-income country, is the world’s second-most populated country with a population of 1.35 billion [12]. The present study was conducted in a secondary level community hospital at Mumbai, a metropolis city with 22.8 million inhabitants [13]. The study hospital caters to a population of 100,000 middle socioeconomic class people. These are employees and their families, within a Department of the Government of India and are covered by a comprehensive insurance scheme through which they are entitled to lifelong free and equitable healthcare. There are 15 community dispensaries spread across the city and patients are referred to a central referral 390-bed hospital (BARC Hospital), where the diagnosis and treatment for breast cancer is carried out. The electronic medical records (EMRs) makes it possible to retrieve the data on demography as well as investigations and clinical notes for follow-up of the patients [14].

One hundred consecutive patients with operable breast cancer, who underwent surgery as the first modality of treatment, at BARC from 2001 to 2009, were included in the study. Patients needing neoadjuvant chemotherapy (CT) and metastatic cancers were excluded. Patients who developed local relapse or metastases during the follow-up period were also excluded from all data analyses as this would affect QOL scores. The cohort of patients whose ‘one-year QOL scores’ were calculated up to year 2010 (published elsewhere) [15], was followed up prospectively for 5 years and those patients were recruited in this study.

All study participants attended a dedicated breast cancer clinic for follow-up after the operation. The protocol stipulates a visit once every 3 months for 1 year, followed by once every 6 months for 4 years and once yearly, thereafter. The patients were requested to fill the questionnaire for the QOL scores during these follow-up visits to the breast clinics. Informed consent was taken from each patient and from patients’ attendant family member in case of illiterate women.

All the patients were clinically suitable for either surgical options (Table 1 cohort characteristics).
Table 1
Characteristics of the cohort
*p < 0.05, **p < 0.001
Data were collected using questionnaires at four different points in the treatment and follow-up; preoperatively on admission to the ward, 6 months after surgery, 1 year after surgery and at 5 years after surgery. Patients were requested to fill the questionnaires and return them to the team. Patients who were unable to read and write English were interviewed by members of data collection team in Marathi/Hindi, the language spoken in the region. The interviewers were trained to make sure that questions are not suggestive or leading to a particular response. The data contained QOL scores, demographic factors of age, sex, educational level, partner status and menstrual status at the time of diagnosis. Details of the oncologic factors and histological features of the tumor were also collected.
A written informed consent was obtained from all the participants. They were informed about the option of undergoing mastectomy or breast conserving surgery and also that the latter would necessitate RT. The patients were then offered to select operation method based on their preference, followed by a uniform and standard treatment protocol for RT and CT.

‘The Functional Assessment of Cancer Therapy-Breast, Version 4 (FACT-B)’ validated for Indian women was used for scoring the QOL in these patients [16]. FACT-B is a 36-item scale containing 4 general subscales or domains, relating to physical symptoms (PWB), social life (SWB), functional ability (FWB) and emotional issues (EWB). The fifth subscale, the breast subscale score (BCS) considers body image, sexual satisfaction and attractiveness perceived by the patient. This contains 9 items and is specific for breast cancer (15). Higher scores indicate better QOL in all the domains.

Data were documented in Microsoft Excel 2013 spreadsheet. The total scores, FACT B Trial outcome index, FACT G and FACT B total scores were calculated. ‘FACT G (global) score’ includes all the domain scores but not the breast specific concerns (BCS), ‘FACT B total score’ included all the five domain scores mentioned in the above section, FACT B trial outcome index considers functional, physical and breast domain scores. Scores were calculated as per the instructions for version 4 of the Functional assessment of Chronic Illness Therapy (FACIT) Measurement system [16]. Missing data was retrieved from case files for demographic and oncological variables.
Age was treated as continuous variable. A two-tailed Students t test was used to detect statistically significant differences between the two study groups. Differences in the average scores were tested using the paired t test. The changes (decline/increase) in the scores in all domains, over time during the study period, were analyzed separately for each group as well by combining both groups together. Values < 0.05 were considered statistically significant. Statistical Package for the Social Sciences (SPSS 24.0, IBM Corp., Armonk, NY) software package for windows was used for all analysis.

The study was approved by the Institutional Ethics Committee (BHMEt BARC Hospital, where the study was conducted (C/DNB/14/10).

All the scores were calculated for patients who could complete 5-year follow-up. Patients who died between the period of 1-year follow-up and 5-year follow-up were excluded from all analyses. The QOL scores for both groups in physical well-being, functional well-being and breast specific domain as well as total scores reduced significantly (p < 0.01) at 6 months compared to preoperatively. The scores were unchanged for social as well as emotional domains in both the groups at the end of 6 months.
The scores nearly normalized at the 1-year follow-up.
Domain scores of emotional, functional and breast specific domain, along with the total scores, had increased beyond the level of the preoperative scores (p < 0.05) at the end of 5 years (Table 2). Figure 2 (trends in QOL scores over a period of 5 years) demonstrates the trends in the scores over period of time.
Table 2
Comparison of scores between “before surgery” and “at the end of five years”, mean ± SD
*p < 0.05, **p < 0.001
×
At the end of 1 year, domain scores of physical symptoms such as pain, nausea, weakness (PWB, 23 vs. 25, p = 0.01), emotional well-being scores (EWB, 21 vs. 23, p = 0.01), body image and attractiveness (BCS, 25 vs. 28, p = 0.02) and the global score which considers sum of emotional, physical symptoms and feeling of closeness to family and friends (FACT G 92 vs. 98, p = 0.01) were significantly better in MRM group as compared to the BCS group (Table 3). At 5 years, this difference had reduced. There was no statistically significant difference in any of the domain as well as total scores between patients undergoing BCT and those undergoing MRM.
Table 3
Comparison of scores between Breast conservation and Mastectomy groups, mean ± SD
*p < 0.05
Table 4 shows the comparison of trends. There was statistically significant decline in scores at 6 months and a significant increase thereafter up to 1 year in both BCT and MRM groups. The scores changed parallelly and similarly in both groups. None of the groups fared better in terms of increase in scores over time. This comparison between the amounts of change in the groups is shown in Table 5.
Table 4
Comparision of quality of life score within the groups separately and combined for (1) before and at 6 months, (2) 6 months and after 1 year and (3) after 1 and 5 year
*p < 0.05, **p < 0.001
Table 5
Comparison of “change in scores” between both study group over time
Both, BCT and MRM groups had similar changes in scores through the study period

The QOL in patients in the present study was similar in the BCT and MRM study arms. Choice of surgical method does not appear to affect the long-term QOL scores in our cohort. Mastectomy perhaps, remains a safe and effective surgical approach in India with a comparable long-term QOL in breast cancer survivors.

This is an unfunded study and authors have no conflict of interest to declare.
Open AccessThis article is distributed under the terms of the Creative Commons Attribution 4.0 International License (http://​creativecommons.​org/​licenses/​by/​4.​0/​), which permits unrestricted use, distribution, and reproduction in any medium, provided you give appropriate credit to the original author(s) and the source, provide a link to the Creative Commons license, and indicate if changes were made. 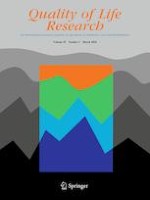 A conceptual map of health-related quality of life dimensions: key lessons for a new instrument