Irritability is common in Attention-Deficit Hyperactivity Disorder (ADHD), but little is known about whether irritability predicts the course of ADHD symptoms over time. Adolescence is a dynamic period of emotional development as well as shifts in ADHD symptoms; an important goal is to identify youth at risk of increasing or persisting symptoms. We examined irritability as a longitudinal predictor of change in adolescents’ ADHD symptoms, as well as how this link may differ in females versus males. The sample included 108 youth (72 males) age 12–16 years (M = 14.21 years, SD = 1.44 years), 62 of whom met criteria for ADHD. Approximately 18 months later, 80 participants (48 males) were followed up at Time 2. A dimensional approach was used to examine changes over time in parent-reported inattentive and hyperactive/impulsive symptoms. Longitudinal path analysis revealed that irritability at Time 1 predicted higher relative hyperactive/impulsive symptoms at Time 2 after controlling for age and longitudinal stability in all variables. A multiple-group analysis examining moderation by sex/gender revealed that this association was significant only for females. These results suggest that irritability may play a key role in the persistence and worsening of hyperactive/impulsive symptoms across adolescence for females, with potential implications for the diagnosis and treatment of females with ADHD.
vorige artikel The Role of Defending Norms in Victims’ Classroom Climate Perceptions and Psychosocial Maladjustment in Secondary School
volgende artikel Preschool Neuropsychological Predictors of School-aged Sluggish Cognitive Tempo and Inattentive Behaviors 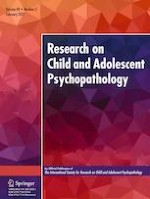 Where it Hurts the Most: Peer Interactions on Social Media and in Person are Differentially Associated with Emotional Reactivity and Sustained Affect Among Adolescent Girls