Intelligence quotient (IQ), has been found to relate to the presence of internalising symptoms in autism spectrum disorder (ASD). This meta-analysis sought to clarify the direction of the relationship between IQ and two prevalent internalising symptoms, anxiety and depression, in adolescents with ASD. Secondly, this study aimed to highlight methodological factors contributing to inconsistent findings in existing research. Self-reported anxiety was found to be significantly higher in youth with a lower IQ, while depression was positively associated with IQ. Consequently, parents, schools and clinicians should be cautious of underestimating anxiety in youth with a lower IQ. However, care should also be taken to ensure adolescents with ASD without intellectual disabilities are not overlooked with regards to social and emotional support. 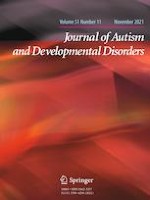 Sibling Adjustment and Sibling Relationships Associated with Clusters of Needs in Children with Autism: A Novel Methodological Approach

Letter to the Editor: Misquoting the ASD Prevalence Rate for Hong Kong: Comment on Tse (2020)

A Longitudinal Study of Parent Gestures, Infant Responsiveness, and Vocabulary Development in Infants at Risk for Autism Spectrum Disorder