This study aimed to examine the presence of Autism Spectrum Disorder (ASD) in a sample of female adolescents with Anorexia Nervosa (AN) during the acute phase of illness. We also compare the level of autistic traits, social perception skills and obsessive–compulsive symptoms in four groups: AN, ASD, and two gender- and age-matched control groups. Of the 30 AN participants, only three scored above the conventional ADOS-2 threshold for ASD. The AN participants were similar to their controls on autistic trait measures, and to the ASD group on obsessive–compulsive measures, and on theory of mind ability and affect recognition measures. Further longitudinal studies are needed in order to determine the association between these conditions.
vorige artikel Mentoring University Students with ASD: A Mentee-centered Approach
volgende artikel Electrodermal Variability and Symptom Severity in Children with Autism Spectrum Disorder 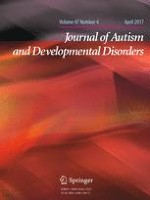 Priming Facial Gender and Emotional Valence: The Influence of Spatial Frequency on Face Perception in ASD