The on-line use of world knowledge during reading was examined in adults with autism spectrum disorder (ASD). Both ASD and typically developed adults read sentences that included plausible, implausible and anomalous thematic relations, as their eye movements were monitored. No group differences in the speed of detection of the anomalous violations were found, but the ASD group showed a delay in detection of implausible thematic relations. These findings suggest that there are subtle differences in the speed of world knowledge processing during reading in ASD. 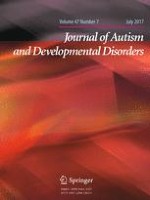 Moderating Effects of Parental Characteristics on the Effectiveness of a Theory of Mind Training for Children with Autism: A Randomized Controlled Trial

Maternal Exposure to Childhood Abuse is Associated with Mate Selection: Implications for Autism in Offspring

Reduced Pseudoneglect for Physical Space, but not Mental Representations of Space, for Adults with Autistic Traits