UV exposure via sunbathing and utilization of sun lamps and tanning beds are considered important risk factors for the development of skin cancer. Psychosocial models of UV exposure are often based on theories of health behavior, but theory from the body image field can be useful as well. The current study examines models that prospectively predict sunbathing and indoor tanning behaviors using constructs and interrelationships derived from the tripartite theory of body image, theory of reasoned action, health belief model, revised protection motivation theory, and a proposed integration of several health behavior models. The results generally support a model in which intentions mediate the relationship between appearance attitudes and tanning behaviors, appearance reasons to tan and intentions mediate the relationship between sociocultural influences and tanning behaviors, and appearance reasons not to tan and intentions mediate the role of perceived threat on behaviors. The implications of these findings are considered. 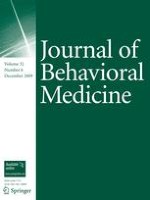 Negative emotions and quality of life six months after cardiac surgery: the dominant role of depression not anxiety symptoms