Invariance of ADHD Symptoms Across Sex and Age: a Latent Analysis of ADHD and Impairment Ratings from Early Childhood into Adolescence | mijn-bsl Skip to main content
ZOEKEN MENU 1 2 3 4

A population-based longitudinal sample of 489 twin pairs was assessed at six time points over ten years to examine the measurement invariance and stability of attention-deficit/hyperactivity disorder (ADHD) symptoms, as well as the developmental relations between inattention (IN), hyperactivity-impulsivity (HI), and multiple aspects of functional impairment. Parent ratings of ADHD symptoms and functional impairment were obtained in preschool and after the completion of kindergarten, first, second, fourth, and ninth grades. Results of the temporal and sex invariance models indicated that parent ratings of the 18 ADHD symptoms function in the same manner for females and males from early childhood into adolescence. In addition to establishing this prerequisite condition for the interpretation of longitudinal and between-sex differences in the IN and HI symptom dimensions, cross-lagged models indicated that both IN and HI were associated with increased risk for both concurrent and future overall, social, and recreational impairment, whereas only IN was uniquely associated with later academic impairment. Taken together, the current results demonstrate that IN and HI are highly stable from preschool through ninth grade, invariant between females and males, and indicative of risk for impairment in multiple areas, thereby providing strong support for the validity of the symptom dimensions among both sexes.
vorige artikel A Randomized Trial Evaluating School-Based Mindfulness Intervention for Ethnic Minority Youth: Exploring Mediators and Moderators of Intervention Effects
volgende artikel Advancing the Multi-Informant Assessment of Sluggish Cognitive Tempo: Child Self-Report in Relation to Parent and Teacher Ratings of SCT and Impairment 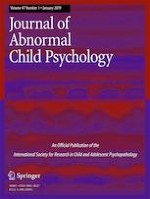 Prevalence of Depressive Disorders in Individuals with Autism Spectrum Disorder: a Meta-Analysis