Everyday interactions with same-racial/ethnic others may confer positive benefits for adolescents, but the meaning of these interactions are likely influenced by individual differences and larger structural contexts. This study examined the situation-level association between contact with same-ethnic others and anxiety symptoms among a diverse sample of 306 racial/ethnic minority adolescents (Mage = 14 years; 66 % female), based on (1) individual differences in ethnic identity centrality and (2) developmental histories of transitions in diversity between elementary, middle, and high school. The results indicated that at the level of the situation, when adolescents interacted with more same-ethnic others, they reported fewer anxiety symptoms. Further, for adolescents who had experienced a transition in school diversity, the positive benefits of contact with same-ethnic others was only conferred for those who felt that their ethnicity was very important to them. The importance of examining individual differences within larger developmental histories to understand the everyday experiences of ethnic minority adolescents are discussed.
vorige artikel Demographic Marginalization, Social Integration, and Adolescents’ Educational Success
volgende artikel A Prospective Study of the Potential Moderating Role of Social Support in Preventing Marginalization Among Individuals Exposed to Bullying and Abuse in Junior High School 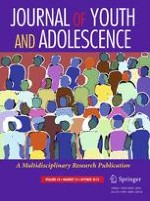 Weight-Related Teasing in the School Environment: Associations with Psychosocial Health and Weight Control Practices Among Adolescent Boys and Girls

Invited Commentary: Broadening the Evidence for Adolescent Sexual and Reproductive Health and Education in the United States