To examine the interactive effects of two proposed risk factors which may contribute to symptom severity of Autism Spectrum Disorder (ASD): prenatal antidepressant exposure and likely gene-disrupting (LGD) mutations. Participants included 2748 individuals with ASD from the Simons Simplex Collection. We examined the effects of prenatal antidepressant exposure, maternal depression, presence of an LGD mutation and their interaction on ASD severity. We found a significant interactive effect between antidepressant exposure and the presence of an LGD mutation on ASD severity in the ADOS and ADI-R verbal communication domains. We consider a “two-hit” model in which one variable lays the foundation for an initial risk which is compounded by a second variable.
vorige artikel Structural and Pragmatic Language in Children with ASD: Longitudinal Impact on Anxiety and Externalizing Behaviors
volgende artikel Erratum to: Interactive Effects of Prenatal Antidepressant Exposure and Likely Gene Disrupting Mutations on the Severity of Autism Spectrum Disorder 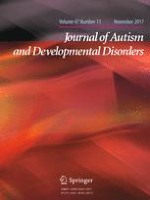 Brief Report: What Happens When I Can No Longer Support My Autistic Relative? Worries About the Future for Family Members of Autistic Adults

Screening for Autism with the SRS and SCQ: Variations across Demographic, Developmental and Behavioral Factors in Preschool Children