The purpose of the present study was to test the efficacy of an 8-week online intervention-based Positive Mindfulness Program (PMP) that integrated mindfulness with a series of positive psychology variables, with a view to improving well-being scores measured in these variables. The positive mindfulness cycle, based on positive intentions and savouring, provides the theoretical foundation for the PMP. The study was based on a randomised wait-list controlled trial, and 168 participants (128 females, mean age = 40.82) completed the intervention which included daily videos, meditations and activities. The variables tested included well-being measures, such as gratitude, self-compassion, self-efficacy, meaning and autonomy. Pre- and post-intervention data, including 1 month after the end of the intervention, were collected from both experimental and control groups. The post-test measurements of the experimental participants showed a significant improvement in all the dependent variables compared with the pre-test ones and were also significantly higher than those of the control group. One month after the intervention, the experimental group participants retained their improvement in 10 out of the 11 measurements. These positive results indicate that PMP may be effective in enhancing well-being and other positive variables in adult, non-clinical populations.
vorige artikel Self-Compassion: a Potential Buffer Against Affiliate Stigma Experienced by Parents of Children with Autism Spectrum Disorders
volgende artikel Facets of Mindfulness Mediate the Relationship Between Depressive Symptoms and Smoking Behavior 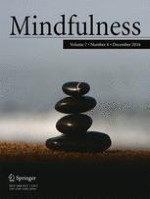 Embodiment and Body Awareness in Meditators

Early Buddhist Mindfulness and Memory, the Body, and Pain