In order to test whether or not instructions specifying the stimulus–response (S–R) mappings for a new task suffice to create bindings between specified stimulus and response features, we developed a dual task paradigm of the ABBA type in which participants saw new S–R instructions for the A-task in the beginning of each trial. Immediately after the A-task instructions, participants had to perform a logically independent B-task. The imperative stimulus for the A-task was presented after the B-task had been executed. The present data show that the instructed S–R mappings influence performance on the embedded B-task, even when they (1) have never been practiced, and (2) are irrelevant with respect to the B-task. These results imply that instructions can induce bindings between S- and R-features without prior execution of the task at hand. 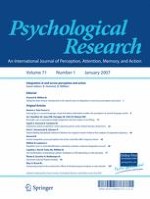 Taking the brain serious: introduction to the special issue on integration in and across perception and action

Outsourcing control to the environment: effects of stimulus/response locations on task selection

The manifestation of attentional capture: facilitation or IOR depending on task demands