Intrusive thoughts are prevalent as a symptom of many psychopathological disorders. Previous studies suggested that inhibitory control enables the suppression of intrusive thoughts, though the existing data is derived mostly from research on intrusive memories. The similarities between involuntary musical imagery (INMI) and intrusive thoughts have prompted the investigation of INMI in order to better understand the underlying mechanisms of such thoughts and how to stop them. Using novel methodologies to induce INMI, the current study examined the role of inhibition, measured using the stop-signal task (SST), in the emergence and prevention of INMI, and consequently, intrusive thoughts.

Thirty-five participants were asked to listen to a potentially intrusive song and to complete the SST immediately after listening to the song. Participants were assigned to one of two conditions: inhibition or no-inhibition. INMI emergence was monitored after 3, 6, and 24 h via online questionnaires.

Results showed significant differences between the conditions at the 24-h time-point; the participants assigned to the inhibitory condition reported INMI significantly less frequently than participants in the no-inhibition condition. 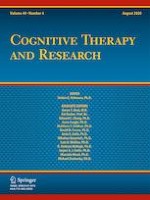 The Relationships Between Early Maladaptive Schemas and Youth Mental Health: A Systematic Review

Dampening of Positive Affect Predicts Substance Use During Partial Hospitalization

The Fear of Losing Control in Social Anxiety: An Experimental Approach

Enhancing Social Connectedness in Anxiety and Depression Through Amplification of Positivity: Preliminary Treatment Outcomes and Process of Change

Cognitive Vulnerability in the Context of Panic: Assessment of Panic-Related Associations and Interpretations in Individuals with Varying Levels of Anxiety Sensitivity