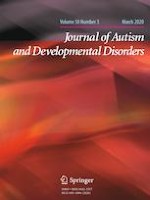 The Perception of Emotions in Spoken Language in Undergraduates with High Functioning Autism Spectrum Disorder: A Preserved Social Skill

Brief Report: Psychometric Properties of the Ability in Behavior Assessment and Interventions for Teachers-Revised (ABAIT-R)